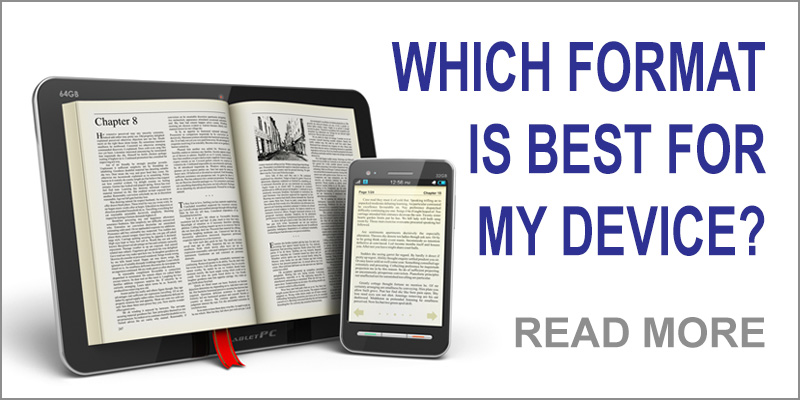 Which Format Is Best for My Device?

One advantage of the ePub format is it allows you more customization in how you display your e-book on your computer or e-reader. With an ePub you can change the page margins, font size, or font for your e-book. This allows the text to reflow on your screen. For example, if you increase the text size of your book, the letters will be larger and there will be fewer words on a page.

There are a number of free e-book apps or programs that let you read an ePub on your computer including Adobe Digital Editions, Calibre and iBooks.

The ePub format can also be read on popular devices such as: While Kindle does not support ePubs, you can use Calibre to easily convert an ePub to mobi, a format supposed by Kindle.

Please note many of the books published by Arrow Publications are available already formatted for Kindle. To find them at Amazon.com, search by title, author or keywords “arrow publications”.

If you plan to read your e-book on a computer or laptop, a PDF might meet all your needs. A PDF preserves the layout of the original book, so you see the same margins, font size and fonts as in the original. For non-fiction books or any book with a lot of graphic, tables and charts, PDF might work best for you.

With a PDF, you are able to zoom in and zoom out on a page. By changing the accessibility setting on the program you use to read a PDF, you can temporarily reflow the text. See your software program’s documentation for more details.

If you are using a standard PDF program to read your e-book, which does not allow you to reflow the text, the ePub format will likely work better on a device with a smaller screen.

Most of our romance graphic novels are available in ePub and PDF formats.

The PDF version is formatted using the original full color 12.5x7.5 inch pages and is best viewed on a computer, laptop or e-reader with a larger screen.

The ePub version of our romance graphic novels is formatted by breaking the full pages into individual panels, which are sized for smaller screens making them idea for e-readers such as the iPhone and Android phone. The ePub version works equally well on a larger screen, too.

Softly, As I Leave You

Ever since Alisha Houston runs into Daniel Mason on the ski slope it seems that they are destined to be together. At first, mad at the leggy, dusky- skinned skiing disaster, Daniel is sure he should keep a safe distance from her. But their paths keep crossing and he is puzzled how he can be so annoyed at a woman and still be so attracted to her. And she definitely turns him on.

Alisha is mortified that the one, sexy man she is fascinated with at the ski resort is the one she sends to the hospital! Then one shattering, unexpected kiss launches them into a love affair that brings red-hot passion and deep caring. Until Alisha’s estranged father dies, leaving behind a secret that devastates her.

Alisha watched as Daniel put the bottle between his lips and sucked. She wondered how those lips would feel on hers. How she wished his beautiful hands were caressing her instead of the bottle. She Read More

Alisha watched as Daniel put the bottle between his lips and sucked. She wondered how those lips would feel on hers. How she wished his beautiful hands were caressing her instead of the bottle. She pulled her mind away from such provocative thoughts.  “I’m relieved that you won’t have to struggle to go to work.”

“Me, too. And if I have any complications, now that I know you’re a nurse…”

She smiled and shook her head.

“I do have a hard time working with the crutches. They definitely not as flexible as ski poles.”

“If I could turn back time and undo everything I’ve caused—” She was still upset about crashing into him on the ski slopes.

“Stop beating yourself up, Alisha. Things are supposed to happen for a reason. In this case, I think it was for us to meet,” Daniel said.

“Wouldn’t it have been a great deal better if we met at dinner?”

He shrugged. “Perhaps. But then there would have been no drama.”

“You know, you have a great laugh.”

“You’re the first one to tell me that. Thank you.”

“How long are you staying? Daniel asked.

“Til Sunday.” Alisha noticed that he had finished the bottle and asked if he wanted another.

“Not just yet,” he said. “I’m leaving on Sunday, as well. Tell you what, why don’t you and I spend tomorrow in town together. I heard about a great seafood place and I’d like to have some lobster before I go home. How about you?”

“Are you really up to doing so much walking?” She asked with a concerned look on her face.

“Is that the nurse speaking or the woman?”

“You certainly are,” Alisha said, eyeing him up and down with exaggerated lasciviousness.

“And you’re a big girl, too,” he said, lifting his eyebrows up and down in an exaggerated manner, “and will be there to help me should I get into trouble.”

They both laughed. It seemed to sweep away any lingering anger or guilt.

The noise got louder and they could hardly hear one another, so Alisha moved closer still. Close enough for Daniel to inhale her pleasant scent of wildflowers. An Instagram picture of him kissing her on the ski slope in the middle of nowhere flashed in his mind.

They planned their outing. A guitarist joined the pianist and people were now on the dance floor. A wistful smile appeared on Daniel’s face.

“Can’t dance with this cast and crutches.”

She bit down on her full bottom lip. “Another thing to feel guilty about.”

Daniel placed his hand on hers. “Sorry. I shouldn’t have said that. It upset you. We’ll go dancing when my cast comes off.”

“But we’re both leaving on Sunday.”

“Have you forgotten we’re neighbors?” Daniel reminded her.

“Duh.” She slapped her forehead.

He squeezed her hand gently. “I intend to see a great deal more of you. Unless…”

They chattered until the bar was closing. His friends came to retrieve him, but wanting to spend more time with Alisha, he decided to go back to the Lodge with her. Emma and Josie had hooked up with two guys so it was just the two of them.

Alisha helped Daniel into her car. He quipped, “I usually help the woman.”

“Indeed you have,” he said and leaned over to gently kiss her. He went back for seconds and when Alisha parted her lips, he slipped his tongue inside. She put her arms around him and the next kiss lasted longer, enough for both their hearts to accelerate. The kisses had been telling and they both felt something. Realizing that they never going to get back to the Lodge if they continued, they reluctantly pulled apart, breathless.

“Which is your cabin, Daniel?” Alisha asked as they approached the Lodge.

Alisha parked the car and got out. Then she helped Daniel out. When he was balanced on the crutches, she walked him to his door and opened it. It appeared empty.

“Are you going to be all right on your own?”

“See you tomorrow,” she said and tilted her head so their lips could meet.

The kiss was pure dynamite and Alisha could feel the imprint of his mouth long after he hobbled inside his cabin. Then she drove to hers which was close by.

As she undressed, two thoughts occurred to her: her strange dream had been about Daniel and might be coming true; and she had a wonderful feeling that this was going to be the most enjoyable Christmas she’d had in a very long time.

There are no reviews yet.

Be the first to review “Softly, As I Leave You” Cancel reply